Does speed of processing or vocabulary size predict later language growth in toddlers?

Einstein was famously very slow to talk, worrying his parents for years. However, according to the story their fears were eventually allayed when Einstein was presented with his new baby sister. “Yes, but where are its wheels?”, complained the disappointed, yet fluent, young Einstein, on discovering that his sister was not, after all, a new toy for him to play with.

I don’t know if this story is true.  I do know that there is huge variation in when, and how quickly, children learn to talk. Some children start talking as early as 8 months of age and master hundreds of new words over the next few months.  Others, like Einstein, seem to save up their talking for special occasions later in life.

Discovering why some children are so much quicker to learn language than others is one of the ‘holy grails’ of language research. Having a better understanding of these differences will help us understand the language development process itself – why only the human brain, in the whole animal kingdom, is capable of developing language. But the problem has more practical implications too; the more we understand the possible causes of slower language learning, the better chance we have of understanding complex developmental disorders like developmental language disorder  (DLD) and dyslexia.

The first results from LuCiD’s Language 0-5 Project, published this month in Cognitive Psychology, give us some new glimpses of an answer. This study, led by Dr Michelle Peter, suggests that it is not just the quality and quantity of speech that children hear that contributes to variation in language learning, but differences in the speed with which children can process (i.e. make sense of) the speech that they hear.

In order to learn language, children need to be able to process incoming sentences; i.e. to segment the words out of the speech stream, encode those words in short term memory, interpret them if they are familiar, and use them together with the context in which the sentence is spoken to learn the potential meaning of unfamiliar words. Since speech comes in rapid and transient signals, with each word lasting on a few milliseconds, this complex processing task needs to be performed very rapidly. Processing must happen before the signal fades, and/or before the information is overlaid by information coming from the next sentence in the speech stream that follows quickly behind.  Since children can only learn from the parts of the speech signal that they can process, the speed with which they can process incoming speech has a substantial effect on what they can learn from what they hear.

As young as 18 months of age, children process language at very different speeds. This means that fast processors are at an advantage; they process more of the incoming speech stream, so they are able to learn more from each sentence they hear. And this has a knock-on effect on the speed of later vocabulary growth. Peters and her colleagues have shown that, because fast processors can learn more from each sentence they hear, they build up knowledge of the words, and even the syntax, of their language more quickly than slower processors.

However, it is not just processing speed alone that matters in building a vocabulary. Unexpectedly, the study also showed that the size of a child’s vocabulary also, in turn, affects processing speed. The authors speculate that this yields a virtuous circle of accelerating development for some. Children who start out with fast processing speed are able to develop a large vocabularies early; which then speeds up subsequent language processing, which accelerates subsequent vocabulary learning, and so on and so on. Unfortunately, however, this also implies a vicious circle for slow processors, whose initial processing disadvantage becomes magnified by the fact that they do not develop a large vocabulary quickly.  In other words, slower processors may experience a double disadvantage; not only are they slower at processing incoming input to begin with, but their inability to build a large vocabulary quickly means that the gap between them and the fast processors widens with development.

In future work the Language 05 project team will explore further this idea of a virtuous/vicious circle of development; the idea that initial differences in the speed with which children are able to accumulate knowledge may actually contribute to widening the word gap between fast and slow learners. This research should help us come to a better understanding of the crucial question: why are some children so much slower than others to develop language? Although a delayed start to language acquisition did not end up disadvantaging Einstein, he is, the exception, not the rule.

How we measure speed of processing

We measure a child’s speed of processing using the so-called “looking while listening paradigm”, invented by Anne Fernald’s research team. Children sit in front of a screen and see a series of paired pictures, only one of which is named (e.g. when instructed to Look at the apple, when viewing an apple and a car). We then use an eye-tracker to measure how quickly children move their eyes to look at the object being named.  The speed which children identify the correct referent of the word is an indicator of how quickly they are able to process the language they hear (their processing speed). 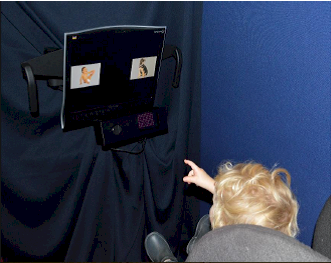 Caro is Professor of Developmental Psychology in the Department of Psychological Sciences and Director of the Language Development Department at the Max Planck Institute for Psycholinguistics in Nijmegen. Her research focuses on how children acquire language, with a particular interest in grammar and in assessing how the child’s environment promotes and shapes language growth. She is an international collaborator for LuCiD (2019-24) and was a Co-Director of LuCiD and  the Language 0-5 project lead (2014-19).