From a beach in Poland to a frozen lake in Finland: Testing grammar learning in different languages is no holiday!

In LuCiD, we work as researchers on a project examining cross-linguistic language learning. We investigate how children acquire verb and noun inflection in morphologically complex languages. We design experiments which allow us to track the development of inflection in children between the ages of 3 and 5 years. Then, we test children in Finland (Sonia) and in Poland (Joanna). After the testing, we come back to Manchester to transcribe and analyse the data.

What actually is inflection?

In grammar, “inflection” is defined as the modification of a word (verb, noun, adjective, etc.) to express different grammatical categories such as tense, person, number and mood in verbs. In nouns, it can be used to denote the subject and object of the sentence or to indicate location or possession. It is marked on words by adding an extra sound or syllable to the beginning (prefixes) or end (suffixes) of a word, or by otherwise modifying the pronunciation of the word. Inflection does not play a big role in English, and is limited to fairly small changes in nouns (inflected in the plural by adding –s), verbs (inflected to indicate various tenses by adding -ed or -ing) and adjectives (inflected by adding –er or –est to form the comparative/superlative form).

In morphologically rich languages such as Polish and Finnish, this process is much more complicated – verbs are produced with different endings for each person/number (e.g. in Polish: ja słuch-am (I listen), oni słuch-ają (they listen)) – on top of that, in Polish there are different sets of endings for different verbs! Nouns are also produced with different endings depending on the context (e.g., in Finnish: ‘Kettu ottaa pallo-n’ (The fox takes the ball) but ‘Kettu ei näe pallo-a’ (The fox does not see the ball)). This means that in Finnish and Polish, children must learn a vast number of different inflectional endings and figure out when to use each of them.

Why do we test children abroad?

So far, studies on the development of inflection have mostly either focused on English or tested only a small part of the whole system of other languages. They were also often case studies on one child rather than systematic experiments on several children. Many of these earlier studies concluded that children learn the whole inflectional system of their native language as early as age 2, and that children do not make errors when they inflect nouns or verbs because the knowledge of inflection is innate. We aim to show that learning morphologically rich languages such as Polish and Finnish is not as easy as has been presumed and that children do make errors when they inflect nouns or verbs which they do not hear frequently in the conversations with adults and with older kids. We want to compare languages with very different inflectional systems and explore whether we can find general processes of language acquisition across languages.

How does it work in practice?

We work at the University of Manchester (Joanna) and University of Liverpool (Sonia) and we both live in Manchester. However, in the last year, we spent almost two months in Poland and Finland collecting data for our experiments. We first design our experiments together to make them as similar as possible in both languages – this is the creative and fun part when we discover our inner artists, draw colorful pictures and make lively animations, trying to make them attractive for children. We do not want our little participants to get bored easily when we ask them to sit in front of the laptop for 10-15 minutes!

Some time before setting off to Poland/Finland, we contact nurseries and encourage them to help us in our research by recruiting parents of children attending the nursery. When we travel, we stay with family, and commute to the nurseries where we test the children.

Sometimes testing in Finland and Poland was quite an adventure!

Because my family lives in a small village in South-western Finland, to find enough research participants I needed to travel to towns up to 40 miles away. Public transportation between rural towns in Finland is not very regular, and therefore I rented a car to be able to get out and about. Having lived in the UK for the last 11 years, driving on the right-hand side of the road turned out to be a bit of a challenge at first, coupled with the fact that while I was testing in nurseries in November, the temperature suddenly dropped to -18 C – I ended up driving 2 hours each day through the ice and snow to reach the nurseries. Finnish nursery kids are really tough though, and they still went happily out to play for several hours during the day – albeit all warmly wrapped up!
The nurseries that took part in our verb and noun studies were very helpful and involved in the testing. To thank them for their help, I gave talks about children’s language development and the Lucid project for the staff and parents of some of the nurseries. Parents and staff were especially interested in hearing about our studies on Finnish, and the preliminary findings of our work there. 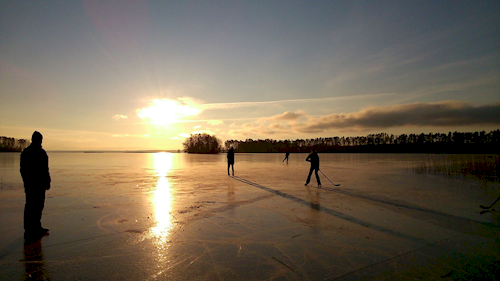 Skating on the lake in wintry Finland

Polish research trips were also full of surprising adventures. I tested children for the verb study in September, which last year turned out to be a very warm month in Poland. Hence it was not always easy to convince children in the nurseries to come inside and “play computer games with me” when they enjoyed themselves playing on the playground with their friends. I was not sure whether I would manage to recruit enough children in the nurseries so I thought of announcing the research on Facebook groups for mothers and among my friends who live in my home city. To my surprise, I quickly had a large turnout – many parents were interested, and although some of them did not live in my city, they were willing to travel there to take part in the study! One mother suggested that we could meet at the beach as she was planning to be there with her children for the whole day, so I checked whether I could use a quiet room at the beach café and ended up testing a child in lovely surroundings by the lake. One of the families who wanted to take part in the study lived in a village close to the city. They asked me whether I could travel there to meet them. Getting there turned out to be more challenging than I thought though! I only managed to catch a bus which took me to a nearby village but that day no buses were going directly to the place where the family lived. Walking through the fields for an hour, surrounded by cows and horses, I did not even see any cars travelling there. Finally I saw my saviour – a lovely red tractor slowly moving in my direction. The driver suggested that he could give me a lift to the village as long as I didn’t mind travelling in....a trailer. Having ‘tractor’ as one of the stimuli in our experiment, I could not say ‘no’ to such a lovely offer! 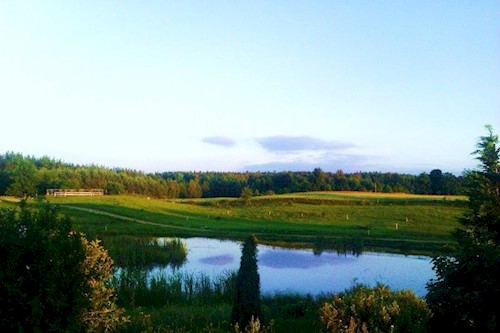 End of summer in the Polish countryside

At the moment, we are analysing the data from the previous experiments. We are also designing a new experiment and when it’s ready, we are planning to go to Finland/Poland again in the autumn to collect more data. We are hoping for some more research adventures then!

Joanna and Sonia are both LuCiD researchers investigating the development of syntax in Polish and Finnish children respectively.

Joanna has a BA in Portuguese Philology and an MA in Psychology from Jagiellonian University. She is currently a PhD student in the Department of Psychology, University of Warsaw. Her research interests focus on the role of internal and external factors in fostering balanced language development in bilingual children.

Sonia has an MA (Hons) in Linguistics from the University of Edinburgh and an MSc in Speech & Hearing Sciences from UCL (2010). Her PhD, completed in 2015 at the UCL Department of Speech Hearing and Phonetic Sciences, explored the communication strategies used in interactions between hearing and hearing-impaired children.