How do children comprehend and produce complex sentences?

In everyday language, we often use one sentence to describe several events. For example, when we describe daily routine, we may say something like “I usually have a coffee before I start working”, or when we want to make an excuse, we may say something like “I am late, because the train was delayed.” Sentences that consist of a main (I am late) and a subordinate clause (because the train was delayed) are called complex sentences and are the focus of our research.

At about the age of three, children start producing such complex sentences (Diessel, 2004). For example, they use them to describe what happened before and after a certain event (i.e., temporal relations), as well as what actions led to what outcomes (i.e., causal relations). However, many children still have difficulty understanding them when they reach school age.

Understanding complex sentences that convey temporal and causal relations is critical to children's learning and academic success. In the first phase of LuCiD, our researchers have explored some of the factors influencing children’s understanding of complex sentences. Let’s find out what they say.

Order of mention is the key

As mentioned, complex sentences consist of a main and a subordinate clause. These two clauses can occur in different orders in English. Compare examples (1) and (2) below.

(1) She paints the old fence before she hoovers the house.

(2) Before she paints the old fence, she hoovers the house.

In the first sentence, the clause order reflects the order of events in the real world. In contrast, in the second sentence, the event that happens later (paints the old fence) is mentioned first.

De Ruiter and colleagues (2018) invited monolingual English-speaking children aged 4 and 5 to take part in a picture-sequence selection task, in which children were asked to select one out of two picture sequences that matched the complex sentence they heard (see Figure 1). They found that children showed better comprehension of sentences that reflected the actual order of events in the real world (see example (1)). In contrast, sentences that reflected the reversed order of events in the real world were harder for children to comprehend correctly (see example (2)). 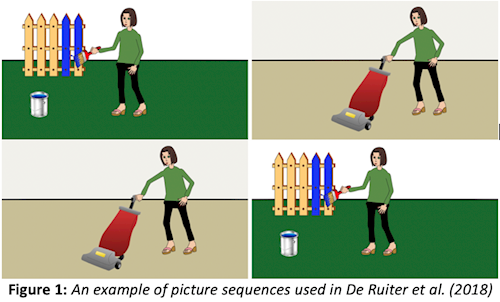 We do not usually hear sentences out of the blue. What we already know (old information) and in what order the old information is presented are also important for sentence comprehension.

De Ruiter and colleagues (2020) used the same picture-sequence selection task to test the additional impact of contextual information on children’s comprehension of complex sentences. The results showed that 4-5 years old monolingual English-speaking children showed better comprehension of sentences in which old information came first in the sentence and old information was encoded in the subordinate clause (see example (3)). This could be because subordinate clauses typically contain information that is known to both speaker and listener (e.g., Gorrell et al., 1989). Placing this information at the beginning allows the listener to retrieve the topic under discussion before new information is encountered (e.g., Haviland & Clark, 1974).

(3) Context sentence: She left the house.

Test sentence: Before she left the house, she ate a piece of cake.

To sum up, De Ruiter and colleagues’ comprehension studies suggest that mentioning events in their actual occurring order and providing contextual information can improve children’s ability to interpret complex sentences.

Do the same mechanisms underlying comprehension of complex sentences also play a role in production?

In our current project (LuCiD Phase Two), we build on the previous two comprehension studies (De Ruiter et al., 2018, 2020), to understand how children learn to produce complex sentences. We aim to determine the extent to which the factors that underpin comprehension also apply to the more demanding task of complex sentence production.

We are calling monolingual English-speaking children aged 3-5 to take part in our production study. If you are interested in the study, please email me (Shijie Zhang) at shijie.zhang@manchester.ac.uk or register your interest at the Manchester Child Study Centre 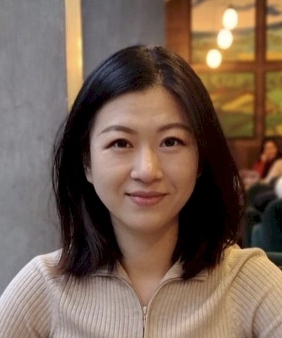 Shijie is postdoctoral research associate working on the Understanding the factors influencing the comprehension and production of complex sentences work package, led by Prof Anna Theakston and Dr. Silke Brandt. In this work package, they will use a range of methods (e.g., corpus analysis, eye tracking, picture selection tasks, and picture description tasks) to understand how children learn to comprehend and produce complex sentences.