Over the course of a six-week period this summer, I was fortunate enough to undertake the LuCiD internship. During this, I worked under the leadership of Dr Kelly Burgoyne and Dr Laura Boundy on a project titled the ‘Investigation into the effect of retrieval practice on word learning in children with Down syndrome’.

During my internship I was involved in a range of different activities. I spent the first two weeks focusing on participant recruitment. During this time, I sent out emails and advertisements to recruit participants for the study. Once we started to receive expressions of interest, I was responsible for ensuring consent was collected, and subsequently emailing participants to schedule times for data collection. I then began collecting data with the participants we had recruited. This became my predominant role for the final two weeks. The data collection for this study takes place across four different zoom calls with each participant. The initial zoom call consists of a BPVS (British Picture Vocabulary Scale) and a speech production task. The BPVS is a measure of receptive vocabulary. During this test the experimenter reads out a word and the child selects the corresponding image from four options on the screen. The speech production task consists of 14 phrases the experimenter reads out and the children repeat; responses are scored to assess the child’s ability to produce speech sounds which are used on the experimental tasks, and this can then be considered in assessing performance on those tasks. The following two zoom calls are the experimental task sessions. In these sessions, children view images of plants and animals and listen to corresponding nonsense words and some information about what each one likes (e.g., a Nepp, which likes worms). In the restudy condition, children are asked to just listen to this information whilst viewing the image. In the retrieval condition children are asked to repeat back the word they have just heard. In the final (fourth) session learning is tested, to ultimately explore if one condition has higher recall rates. I was lucky enough to be able to collect data in all four sessions, with both typically developing children and children with Down Syndrome.

This internship has taught me so much about research. It has confirmed my aspirations to work within the field of psychology and opened my eyes to the intricate steps involved within research, for example the importance of standardised test protocols, including using scripts. The internship has tested many skills I already had and provided me with the opportunity to develop many new ones such as carrying out data collection on Zoom, using Qualtrics and carrying out the BPVS. Furthermore, it prepared me well for the year placement I am currently undertaking, as a student research assistant. I am very grateful for the opportunity that the LuCiD internship provided, and I would recommend it to anyone considering a career in research.

We are still recruiting for this study so please do get in contact if you may be interested! We are looking for typically developing aged 4-6, and children with Down Syndrome, aged 8-12. Email Emily Croft to get involved emily.croft@student.manchester.ac.uk 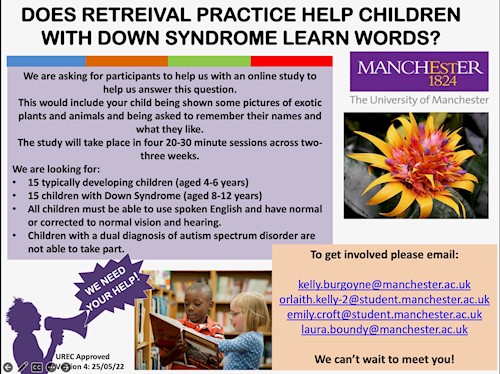 Orlaith is an undergraduate student studying Psychology at the University of Manchester. She undertook an internship with the LuCiD Lancaster team in the summer of 2022.