Last month we were fortunate enough to host a seminar with world-leading Developmental Language Disorder (DLD) researcher, Prof Laurence B Leonard. (You can watch this back here). He presented a series of studies which have the potential to support word learning in children with DLD. Following on from this, I chatted to him about the clinical implications of these studies. This blog summarises the evidence presented in the seminar along with my discussion with Prof Leonard about the potential application of this research for practice. (If you’ve watched the seminar and just want to jump to implications for practice, you can do so here).

DLD is diagnosed when children have a significant language deficit with no obvious cause (e.g., no known sensory or neuro-cognitive deficit). Children with DLD generally have vocabularies with less breadth (fewer words) and less depth (poorer understanding of the words they do know) than their typically developing (TD) peers. Over time, these children are at risk of falling further behind their TD peers as the gap widens from preschool through to adolescence and into adulthood. Research suggests that they require more exposures to novel words than their TD peers in order to learn these new words.

Prof Leonard’s research group have been focusing their research on how to support word learning in young children with DLD. Specifically, they have been investigating whether a technique called ‘retrieval practice’ can facilitate these children’s word learning and retention.

What is ‘retrieval practice’?

Retrieval practice refers to being asked to recall knowledge (or essentially being tested on what you have learned), and stems from research by cognitive scientists into how humans learn and remember information. Research by Roediger and Karpicke (2006) with adults shows that people are more likely to retain knowledge for longer if they study AND regularly test (retrieve) their knowledge, than if they study for the same amount of time but test (retrieve) their knowledge less frequently.

Applying ‘retrieval practice’ to word learning in children with DLD

Prof Leonard’s group have taken these ideas from adult studies of how we learn and applied them to word learning studies in children with DLD1. Remember, children with DLD have vocabularies with less breadth and less depth than their TD peers, so a technique which has been shown to work well in supporting learning, and retention of this learning, could help to address both of these concerns. And indeed, their studies show promising effects for word-learning in children with DLD. Prof Leonard presented 4 experiments.

In the first of these experiments (Leonard et al., 2019a), they tested whether repeated study (RS) or repeated spaced retrieval (RSR) was more effective in supporting children’s word learning both in children with DLD and TD children.

In this experiment, children were shown a picture of an unfamiliar animal, told its name (e.g., this is a nepp) and given some information about the animal (e.g., a nepp likes birds). They were then shown another picture of an unfamiliar animal, told its name (word form) and given some information about what the animal likes (meaning). This was repeated with another new animal and another. In all conditions each word was heard 48 times. These were heard in two 20-minute sessions over two consecutive days. In the RS condition, children were only asked to retrieve the information in a test five minutes after the end of session on day 2 and then again one week later. In the RSR condition, amongst the study trials children took part in retrieval trials where their learning was tested at spaced periods throughout both sessions as well as five minutes after the end of the session on day 2 and again one week later. See the schedules for the RS condition and RSR condition in figures 1 and 2 respectively. The retrieval trials involved showing an image of one of the animals and asking the children to recall the animal’s name (word form) and also what the animal likes (meaning). 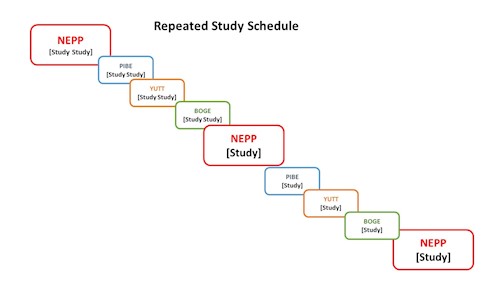 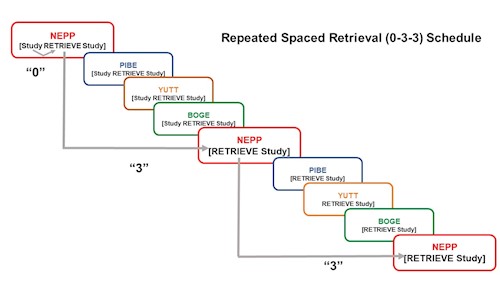 In both TD and DLD groups, children learned the word forms (animal names) and word meanings (what the animals liked) better in the RSR condition than in the RS condition and this held both in testing five minutes after the experiment and then again one week later. The testing at the end of the sessions and one week later also included a recognition task, where children were shown 3 images of animals and asked to identify the correct one when given the animal name (e.g., which one is the nepp?). All the children were at ceiling for this task.

The next experiment (Haebig et al., 2019) followed a similar format to the previous one but instead of comparing RSR and RS, it compared RSR to repeated immediate retrieval (IR). This was to help identify whether the results from experiment 1 were due to the use of RSR or simply repeated retrieval of any kind. Here they found that in both TD and DLD groups, children learned the word forms (animal names) and word meaning (what the animals liked) better in the RSR condition than in the IR condition. This was true for their performance in the test five minutes after the experiment and the test one week later. The children with DLD scored better in word recognition (choosing the animal from 4 pictures) in the RSR condition than in the IR condition, whereas the TD children were at ceiling in both conditions.

The next experiment (Haebig et al., 2019, see also the feasibility study in Haebig et al., 2018) looked at electrophysiological measures using electroencephalogram (EEG) to see whether these would detect differences between the two conditions. They based this experiment on a classic N400 picture-word mismatch task, where participants show a brain response known as the N400 when they see a familiar picture mismatched with a familiar word (e.g., a picture of a dog and the word ‘boat’). In this experiment, Prof Leonard’s group wanted to establish whether this N400 response was more prominent for mismatches involving novel words that are better learned. The idea here was that if you know a word really well you would be more surprised by the mismatch than if you know a word less well. They again taught a group of children with DLD and a group of TD children novel words. This time they taught them only two words, where one of the words was learned substantially better (using RSR) than the other (using IR). At the end of the learning period, they then showed the children the words they had learned alongside mismatched pictures.

In the final experiment presented (Leonard et al., 2019b) Prof Leonard’s group sought to discover whether RSR would support learning with other word classes, in this case adjectives. They also wanted to find out whether the benefits of RSR are limited to the trained word-item associations, or the words are learned with broader meanings that could be generalized. As adjectives, by definition are attributed to objects, could the children learn to expand their meanings to new objects, rather than just the ones they knew?

In this experiment TD and DLD children were shown pictures of familiar objects given similar characteristics. Each characteristic was associated with two objects (e.g., a curly toothbrush and a curly pencil which were ‘taimik’, a spiky truck and a spiky cow which were ‘zogi’ and so on). During the learning period they were presented in turn with one of these images and told ‘The cow is zogi, it’s very zogi. This cow is really zogi’. They were then shown another picture of a familiar object alongside use of the novel adjective ‘The toothbrush is taimik, it’s very taimik. This toothbrush is really taimik’, etc. following a similar schedule to experiment 1. When it was time to present them with ‘zogi’ again, they were now shown the other zogi object (e.g., the truck), and so on for each of the novel adjectives.

Again this experiment was split into an RSR condition and an RS condition. In the RS condition children just learned the objects in turn following the schedule. In the RSR condition, the children had spaced retrieval trials where they were shown an image they had seen earlier (e.g., a zogi cow) and invited to, ‘tell me about the cow. The cow is very …. ’.

At the end of the RS and RSR study sessions the children were tested both using the images they had seen during the learning period and also new images, not seen in the learning stage, of other objects with similar attributes to those they had seen. This was to test whether they could generalize (e.g., for zogi they saw a car and a table covered in spikes, for taimik a curly spoon and flower, etc.). The children were also tested again one week later.

In all of these experiments, children’s word learning benefitted from the RSR condition and, critically, the children with DLD were just as responsive to the RSR conditions as TD children. The children with DLD were also able to retain information from 5 minutes to 1 week as well as TD children, suggesting that they are able to remember words as well as TD children, provided they have learned the words thoroughly in the first place. They were also able to generalize words to new objects with the same attribute, like their TD peers.

What are the clinical implications of these studies?

Given the promising outcomes of RSR for word learning in children with DLD shown in these experiments, there seem to be clear potential clinical implications from these studies. I asked Prof Leonard how he saw these playing out:

“The studies thus far show that the learning and recall of novel words by children with developmental language disorder (DLD) is greatly enhanced if opportunities to retrieve the word are included during the learning period. When retrieval trials occur often and are spaced so that they are somewhat effortful but usually successful, children’s retention of the words at least over a one-week period is quite good.

The particular retrieval schedules studied to date can be readily adapted to child-friendly formats such as children’s book reading. The caregiver or therapist can read the story, naming the new objects or attributes, and, at prescribed moments, quiz the child on the name.

However, before this potential application can be treated as a bona fide clinical method, more research is needed. One line of research can be devoted to discovering the ideal retrieval schedule2 to produce the highest degree of retention possible. A second line can be directed at creating a book reading format that captures the facilitative aspects of laboratory retrieval protocols but with the approach made more natural and engaging for children. Our laboratory is currently following both of these lines of research”.

So good news, but more research is still needed. Let’s watch this space!

Helen is the LuCiD Centre Manager.