The world is an incredibly complicated place when it comes to learning your first words. Imagine a toddler playing with a toy duck, a toy rabbit, and a brand new, orange toy with a very long neck. The toddler’s mum or dad points at the toys and says “Look, giraffe!”. But how does the child know what “giraffe” means? Is it the colour of the toys? The game being played? Is it another word for “rabbit”, perhaps? If you think about it, “giraffe” could refer to anything the child can see, hear, taste or smell! But despite having to solve this puzzle every time they hear a new word, by around a year babies begin to speak.

Understandably, how children crack the word learning problem has been studied intensively for decades, and we now know that two-year-old children can work out the meaning of a new word based on words they already know. That is, our toddler can work out that “giraffe” refers to the new toy, because the other two are called “duck” and “rabbit”.  This clever behaviour has been demonstrated many times, all over the world, with toddlers from 18 months e.g., [1]–[3]. So how do they do it? There are two likely possibilities. The first is that toddlers associate new words (e.g. “giraffe”) with new things (e.g., the orange toy). We’ll call this a “new-to-new” strategy. The second is that they use a process of elimination to work out that because the brown toy is called “rabbit”, and the yellow toy is called “duck”, then the orange toy must be “giraffe”. This is known as “mutual exclusivity”.

In a recent study with two-year-old children [4], toddlers were better at learning words for a new toy when there were only two other, familiar toys present. When there were more than two familiar toys, toddlers couldn’t learn the words. If children use a new-new strategy, then the number of toys shouldn’t affect how easy it is to learn words, because they only need to look at the new one to link it with the word. The authors of this study concluded that children must be using mutual exclusivity: looking at four familiar toys to rule them out before linking the new word to the new toy is harder than looking at just two familiar toys.

So, it looks like toddlers use mutual exclusivity to work out what words mean. So far, so astonishing! But where do the robots come in? With any study in developmental psychology, we can observe what children do but only guess what they’re thinking. With robots, we can observe what they do and observe what goes on inside their “brains” – after all, robots are just computer programs with bodies. And if robots do what children do, the way the robot is programmed may have something in common with how children’s thinking works.

LuCiD researcher Dr. Katie Twomey, with Dr. Jessica Horst from the University of Sussex, and Dr. Anthony Morse and Prof. Angelo Cangelosi from the University of Plymouth wanted to find out what goes on when children in the study were learning words. They used iCub [5], a humanoid robot designed to have similar physical proportions to a three-year-old child. They programmed it using simple software [6] that lets the robot link the words it hears (through its microphones) to objects it sees (with its cameras).  So, like children in the study, iCub could either use a new-to-new strategy, or mutual exclusivity to link words to objects.

First the researchers trained iCub to recognise toys when it heard their names, by pointing. (Watch an example of this on youtube) . Then, iCub did the same task as children: the researchers showed it several familiar and one brand new toy. When iCub heard a word (e.g., “bus”) the robot pointed, indicating which toy it associated the word with. With just its simple software, iCub could solve the word learning puzzle: it pointed at new toys when it heard new words. Amazingly, when the researchers tested iCub’s word learning they found that iCub did exactly what children did: it only learned words in the context of two familiar objects – not three or four. So, like toddlers, iCub learned words using mutual exclusivity. 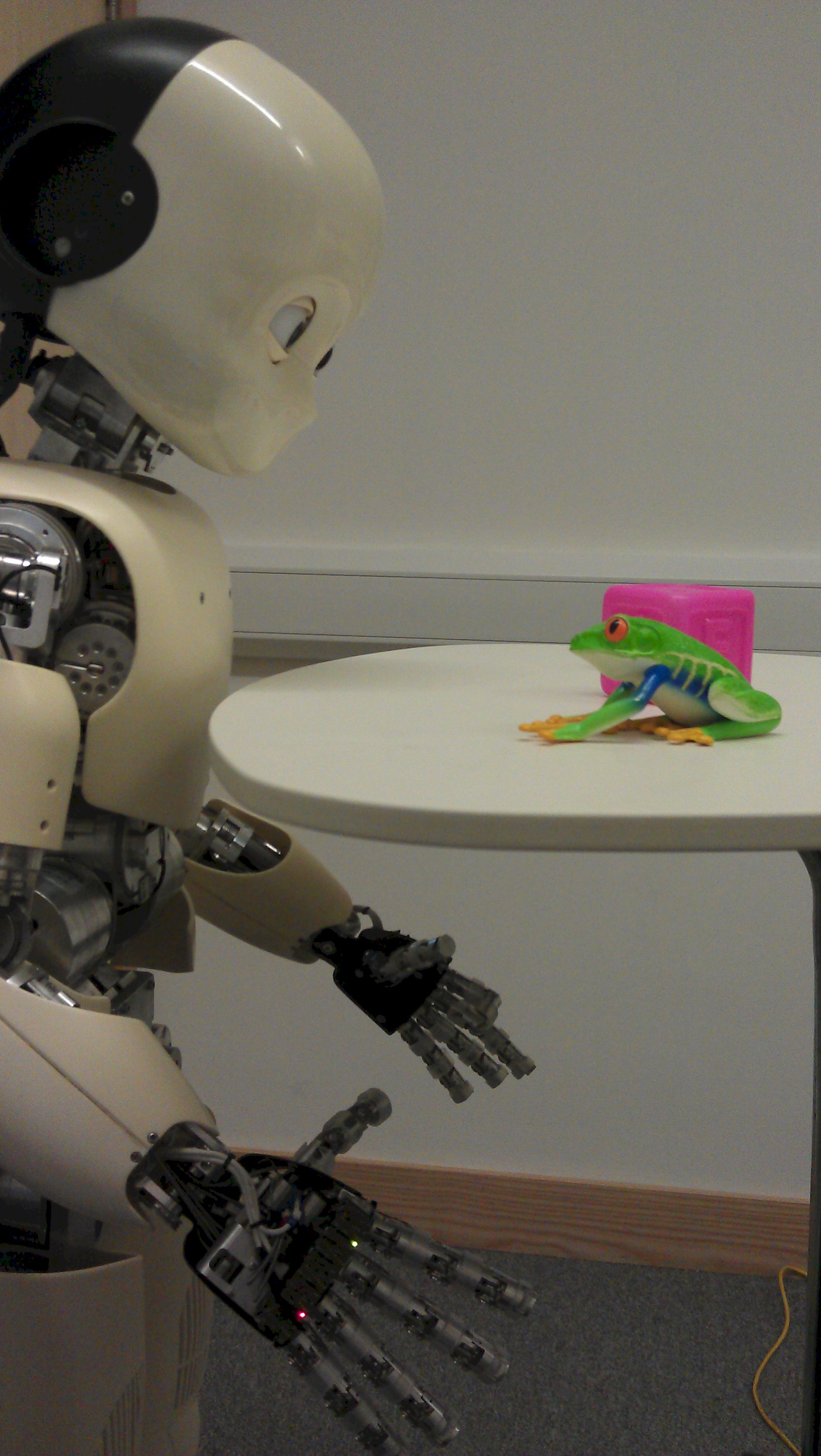 ut why use a cutting edge piece of technology when children do this all the time? Remember, we can see what iCub is thinking! What this new study shows is that mutual exclusivity behaviour can be achieved with a very simple “brain” that just learns associations between words and objects – there’s no need for iCub to reason in-depth about what it sees, and what it already knows. In fact, intelligent as iCub seems, it actually can’t think “I know that the brown toy is a rabbit, and I know that that the yellow toy is a duck, so this new toy must be giraffe”, because its software is too simple. This suggests that at least some aspects of early learning are based on an astonishingly powerful – but elegantly simple – association-making ability that allows babies and toddlers to rapidly absorb information from the very complicated learning environment.

More adventures with iCub are underway – watch this space! And remember, next time you say your child has a brain like a sponge, you might be closer than you think!

The full study is reported in the following article, available open-access:

Dr Katie (Katherine) Twomey is a Lecturer at the University of Manchester. She uses empirical and computational methods to examine the foundations of language acquisition.