The acquisition of tag questions

This project studied the development of tag questions. Tag questions are frequently used in British English to convey a wide range of pragmatic functions, for example as politeness devices concerned with facilitating continuing conversation, indicating uncertainty, error, or expressing disagreement (Tottie & Hoffman, 2006). Thus, learning to produce and comprehend tag questions is an important aspect of language learning, especially with respect to social functioning. 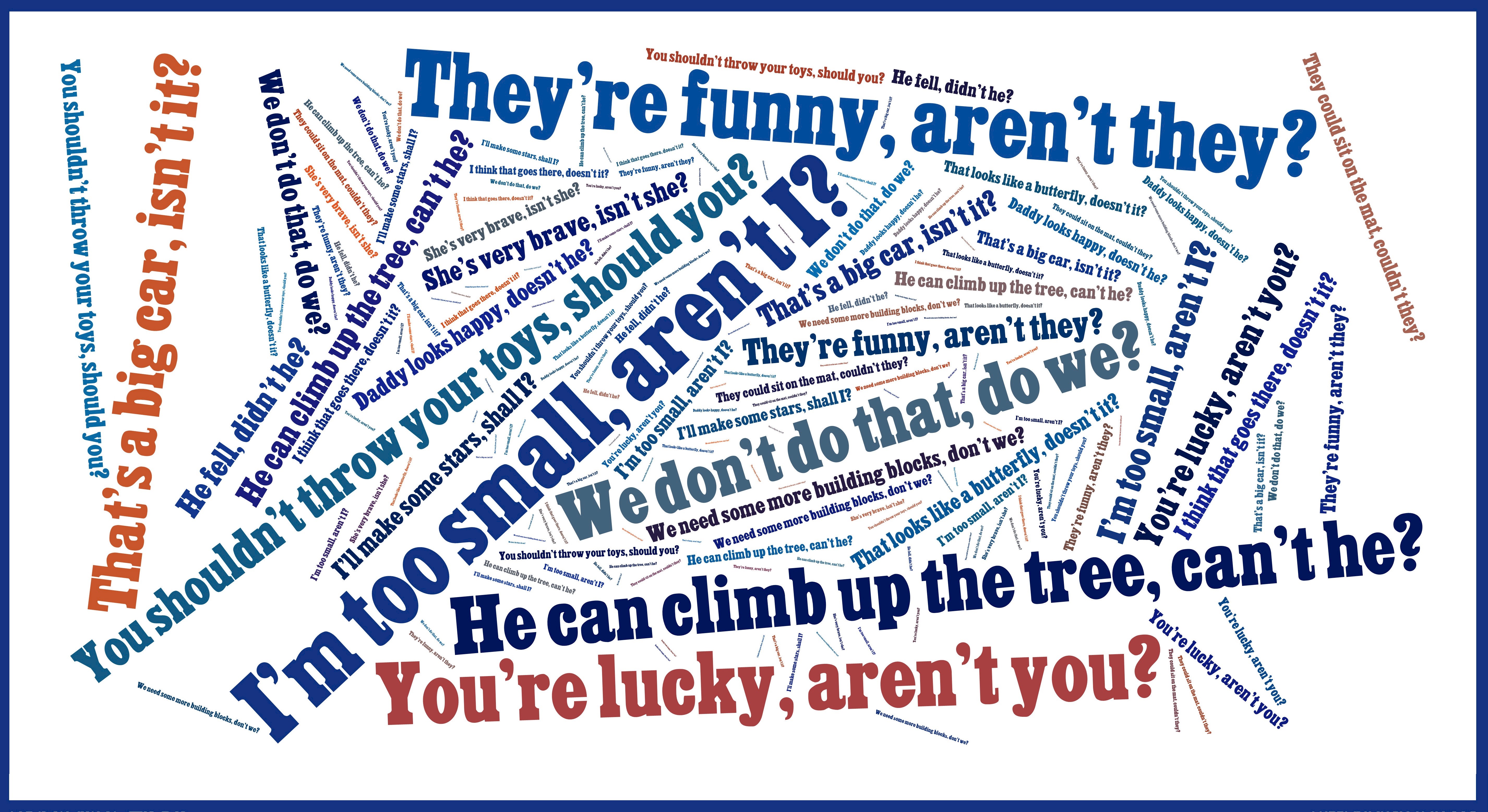 However, for the language learning child, tag questions pose a number of challenges. Syntactically, tags must agree with the matrix auxiliary form, often (but not always) take opposing polarity, and must occur with a pronoun (Sylvia can go to the park, can’t she?). Furthermore, variations in intonation and illocutionary force mean that the same tag can convey a range of pragmatic functions, for example to state the obvious (Well you’ll need your umbrella. It’s raining, isn’t it?) or to express a degree of doubt in one’s own belief (I might need my umbrella, it’s raining, isn’t it?).

Previous research has shown that children make a number of errors in their early use of tag questions, for example auxiliary and pronoun matching errors, and polarity errors (e.g. Wells, 1979; Richards, 1990; Berninger & Garvey, 1982). However, relatively little is known about how the language children hear relates to their acquisition of tags in terms of the frequency of both forms and functions. For example, do children learn a tag form such as ‘isn’t it?’ and use it with a variety of different functions, do they learn to mark a specific function (such as facilitating conversation) and do this using a variety of different tag forms, or do they learn specific forms with specific functions, only gradually learning to generalise between them? We were interested in finding out how children learn these complex form-meaning mappings, and how the frequency of use of different forms and functions in their input affects acquisition.

In the first part of this project PhD student, Michelle Davis, conducted the labour-intensive task of hand-coding tag questions produced by children between the ages of approximately 3-5 years and their caregivers for a variety of properties (e.g. auxiliary verb form, pronoun, polarity, the presence of errors) including their pragmatic function (e.g. to facilitate conversation, to soften criticism). These data were then interrogated to establish, first, how the different properties of tags patterned together in the children’s speech, and how this compared to their caregivers. Second, we examined the frequency of use of tag questions in the input and assessed whether this could predict (i) children’s usage and (ii) children’s errors. Finally, we adopted a broader approach to assessing the role of the input, similar to that used in our linked work package on wh-questions (WP7).

Specifically, we wanted to establish whether children learn tags primarily from the use of tag questions in the input (which might suggest they learn a specific tag form such as ‘isn’t it?’ with a specific tag function, e.g. to facilitate conversation) or if, instead, children were learning from other similar forms in their input (e.g. yes-no questions such as ‘Isn’t it cold today?’ which have a rather different function). Our findings suggest that children’s correct usage and errors are best predicted by the frequency of particular forms and/or form-function mappings in tag questions in the input. This suggests that the specific functions of tag questions are encoded alongside their formal properties, at least in the early stages of acquisition. We are currently writing these studies up for publication and have given conference presentations of our preliminary findings (see below).

In the second part of this project PhD student, Michelle Davis, is running a sentence-repetition study to assess experimentally how the frequency of use of specific form-function mappings influences 3 and 5-year old children’s ability to repeat tag questions. This will help us better understand how knowledge of tags is represented in the developing linguistic system.

Davis, M., Cameron-Faulkner, T. & Theakston, A. (2017). It’s raining, isn’t it? The use of tag questions as a test case for form-function mappings. 14th International Congress for the Study of Child Language (IASCL), July 17-21, Lyon, France.

Theakston, A., Davis, M. & Cameron-Faulkner, T. (2016). It’s raining, isn’t it? Children’s use of tag questions as a test case for the role of form-function mappings in early language acquisition. In T. Tenbrink (Ed.) Proceedings of the UK Cognitive Linguistics Conference, p.154.